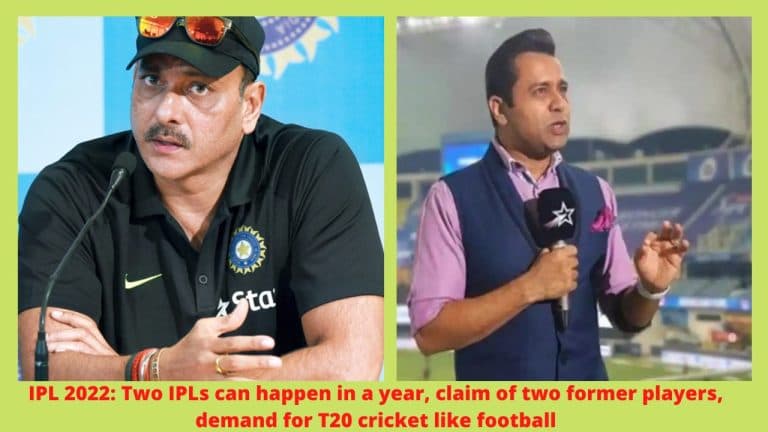 IPL 2022: Two IPLs can happen in a year, claim of two former players, demand for T20 cricket like football

IPL 2022: Former India coach Ravi Shastri believes that the T20 format is not meant for bilateral series between international teams, but it should be held only in the World Cup.

Shastri’s remarks came ahead of India’s T20I series against South Africa. The former cricketer said that T20 cricket should be like football where you only play the World Cup. No one remembers the bilateral tournament.

Ravi Shastri said that I doesn’t “remember a single T20 game as coach of India, barring the World Cup. A team wins the World Cup and they remember it. Unfortunately we don’t, so I don’t even remember that.

Shastri said – Franchise cricket is being played all over the world, each country is allowed to play its own franchise, which is their domestic cricket and every two years you can play a T20 World Cup.

Aakash Chopra said that in future there may be two IPLs in a season :-

Meanwhile, former India opener Aakash Chopra said that in future there may be two IPLs in a season. It can be implemented in a phased manner. This famous commentator said that he thinks it will happen soon.

Ravi Shastri also seemed to agree with Akash’s words. He said, “It is possible that this may happen in the future. 140 matches can divided into 70-70 matches in two seasons.”

Ravi Shastri, “Nothing is more in India” :-

Ravi Shastri said, “You can say it will be too much, but in India nothing is too much. I have seen people living in Bio-Bubble. After leaving Corona, people are enjoying with their families. In the 15th season of IPL, 70 matches of league round and four matches of knockout played.