Harbhajan Singh may have created some behemoths, but Kolkata Knight Riders captain Eoin Morgan said that keeping Chennai’s slow pitches in the upcoming IPL in mind, the team’s spin department Will be strong.

40-years-old Harbhajan decided not to play in the league stage in Dubai last year IPL 2020, he was bought by the two-time IPL champion KKR at a base price of two crores while he was not sold in the first round of the auction

Harbhajan will play the first time for Kolkata Knight Riders, He has been a part of the Mumbai Indians and Chennai Super Kings team.

The KKR captain said, “Our team has been strengthened by connecting Harbhajan Singh with our team. When you look at our spin department in full, it is one of the best of the tournament and it is factual.”

KKR last won the IPL title in 2014, after which the performance of the team has not been special. The team is worried about their captain Eoin Morgan’s form as well as his injury

Morgan was ruled out of the series after the first ODI from India due to a finger injury. In the T20 series too, he could not do anything special and scored just 33 runs in 5 matches at an average of 11.

The happy news for KKR is that Shakib Al Hasan has got the NOC from Bangladesh Cricket and will join the Kolkata team. The franchise bought him in the IPL 2021 auction for 3.2 crores. 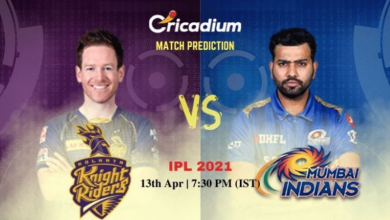 Captain Morgan out of the final two ODIs against India