The effect of corona on the IPL 2021 is beginning to be seen. After the positives of the players, staff, and groundsmen of the teams, it is now reported that the Bangladeshi cricketer associated with the league can withdraw their name.

they can leave the 14th season of IPL and return to his country. With the withdrawal of names in the IPL among Bangladeshi players, the biggest blow will be to teams like Kolkata Knight Riders (KKR) and Rajasthan Royals.

Shakib Al Hasan is the main player of KKR, while Mustafizur Rahman is an important link of Rajasthan Royals. But, these two players playing in the tournament may soon return to their country. Bangladesh Cricket Board Chief Nizamuddin Chaudhary said that these players may have to do this due to the new Corona Protocol issued by the Health Ministry of the Bangladesh country.

According to Bangladesh’s new Quarantine Rule, which came into effect on May 1, foreign travelers coming from India and South Africa will have to stay in Quarantine for 14 days

Bangladesh Cricket Board will also have to take special permission from the Directorate General of Health Services to be exempted from it. Earlier, the Bangladesh Cricket Board used to get the rules relaxed for its foreign coaching staff and cricketers. However, given the second wave of Coronavirus, there is little scope for travelers coming from India and South Africa to be exempted.

Due to the return of the Bangladesh cricket team from Sri Lanka, they may not have to follow the same protocol. BCB Chief Nizamuddin Chaudhary said that we will talk to Shakib and Mustafizur and learn about their next 15-day plan.

Apart from this, we will also talk to the Health Ministry and find out the protocol for those two players, which they will have to follow when they reach Bangladesh. ” First Shakib and Mustafizur were to return to Bangladesh on May 19, and they had to join the national team after a 3-day quarantine.

Both players have to participate in the 3 ODI series starting against Sri Lanka from 23 May. The BCB said that “If the Health Ministry says that they have to remain quarantined for 7 to 14 days, then they will have to leave IPL 2021 and return soon.” But before that, we have to find out what the new rules will be for them. We are bound by the rules of the Government of Bangladesh and will take the decision as per the guidelines of the same. ” 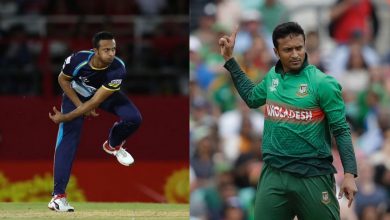