Ishant Sharma became the sixth Indian and third pacer from the country to take 300 wickets in Test cricket, joining legends such as Kapil Dev and Anil Kumble. Ishant reached the landmark when he trapped Dan Lawrence.

Anil Kumble (619 wickets) and Kapil Dev (434 wickets), Ravichandran Ashwin (386 wickets), Harbhajan Singh (417 wickets), and Zaheer Khan (311 wickets) are the other bowlers from the country who have reached the landmark.

‘Congratulations Ishant. He becomes the third Indian fast bowler to take 300 Test wickets. He traps Lawrence in the front as England lose their third wicket,’ the BCCI tweeted

The 32-year-old Ishant Sharma reached the milestone in 98 matches, more than the other Indian bowlers in the club.

Ravichandran Ashwin was the fastest to get there, taking only 54 matches, followed by Anil Kumble (66 matches), Harbhajan Singh (72 matches), Kapil Dev (83 matches), and Zaheer Khan (89 matches).

I Sharma made his Test debut back in 2007 against Bangladesh.

He missed the four-match Test series against Australia due to a side strain and now he came back for the challenge against England. 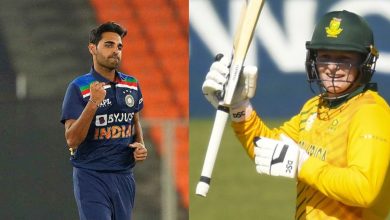 MI happy with the return of Quinton de Kock

Shah Rukh Khan has a glimpse of Pollard said Kumble