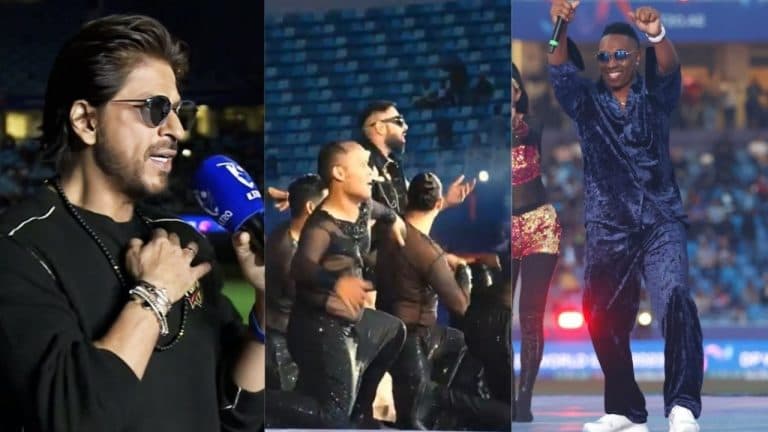 According to the report of ESPN Cricinfo, Dwayne Bravo shared the stage with these superstars and entertained the fans a lot by showing his talent. Please tell that a total of 6 teams are participating in the International T20 League. These include Abu Dhabi Knight Riders, Desert Vipers, Dubai Capitals, Gulf Giants, Sharjah Warriors, MI Emirates. Interestingly, most of the teams owned by IPL companies.

King Khan seen wearing a black T-shirt and black pants. He said the famous dialogue of ‘Pathan’ in the ceremony. He said, ‘If you keep the party in Pathan’s house, then Pathan will come for the guest Nawaji and will also bring Pathan together’. Hearing this dialogue, the fans started shouting loudly.

Apart from King Khan, West Indies veteran Dwayne Bravo is also seen singing a song holding a mike in his hand at the ceremony. Apart from this, superstar Badshah produced the International T20 League anthem Halla Halla. Sharing the stage with her was megastar Jason Derulo, who gave a power-packed performance at the ceremony.

Batting first, the Dubai team had given Abu Dhabi Knight Riders a target of 187 runs. In response to which Abu Dhabi’s team could only score 114 runs at the loss of 9 wickets.